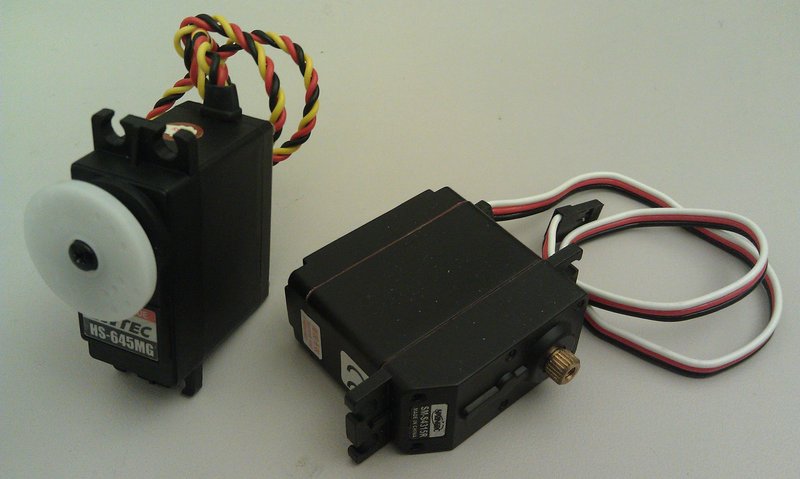 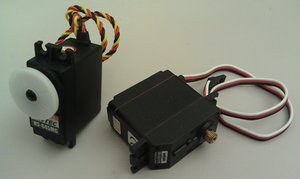 RepRapFirmware allows you to connect other devices to outputs that are not required for their primary purpose. The Duex 2 and Duex 5 expansion boards for the Duet 2 WiFi and Ethernet also provide additional outputs.

'Hobby' servos can be connected and controlled by the Duet range of boards. However, there are limitations on the size of servo that can be powered directly, due to the current draw of the servo (particularly when it stalls, i.e. 'stall current'), and the current the servo can generate when it stops or is forced to turn ('regenerative braking'). Both of these can have a damaging effect on the Duet and/or connected peripherals, eg PanelDue.

Stall current is the maximum current drawn when the motor is applying its maximum torque, either because it is being prevented from moving entirely or because it can no longer accelerate given the load it is under. This is 'under normal conditions', i.e. the motor isn't being asked go from max speed in one direction to max speed in the other, which can generate even higher currents.

Your servo's stall current should not exceed the Duet's available current (see Duet board 5V current limit below), and it's advisable to have some spare current capacity, so don't specify a servo that uses up all the remaining current. The effect of a servo drawing too much current will be to drop the voltage on the 5V rail, most likely leading to a Duet board reset, but may damage the 5V regulator.

Servos that are commanded beyond their movement limits usually stall. This heats up both the servo and the Duet. The servo is likely to burn out if held in this state. So:

When a servo stops moving, it can pump a large amount of current into the +5v rail due to regenerative braking (the servo motor effectively becomes a generator). If unchecked, this may increase the voltage of the +5V rail above the safe limit. This applies whether the servo is connected directly to the Duet or to an attached expansion board or expansion breakout board. See 'Recommendations' below.

Very generally, there is a correlation between stall current and the amount of current a servo produces in regenerative braking. However, a servo that has a stall current close to the available 5V current from the Duet might still pump enough current into the 5V rail to be a problem.

Current limit is the total for 5V and 3.3v. Subtract any current draw, including the internal current consumption (usually around 200-300mA), any PanelDue or other display, connected and powered SBC and peripherals, and any endstops/Z probes that draw significant power, to find the available current for a connected servo.

There are many different types of hobby servos, and we do not recommend any particular one. Check the specification of any servo you connect to your Duet, in particular the idle, running and stall current. Generally, so-called '9g' servos should be okay to connect directly (but please check your servo's specs! And see note below about Duet 3 MB6HC), but larger servos should have additional protection, or be powered independently of the Duet (see Recommendations).

Servos of similar specification to this should be fine to connect to a Duet without extra circuitry:

This motor would require extra circuitry (see Recommendations) or risk damage to the Duet and/or connected peripherals, particularly due to Regenerative Braking.

On the Duet 2 WiFi / Ethernet / Maestro, if a servo feeds power back (regenerative braking) then the internal 5V rail voltage will increase. This could damage other devices connected to +5V (e.g. PanelDue), also if the rise is high enough it could blow the mosfet drivers (rated at 7V) and the 3.3V regulator (rated at 6.5V). If the 3.3V regulator goes, it may take out other components on the board too.

On Duet 3 MB6HC, the internal and external 5V are separated, but the built-in 5V regulator regulates the external +5V rail (this was to provide consistent power for an attached RPi). This means that if a servo pumps power into external +5V, the internal 5V power will drop out for a short time, causing the board to reset. Again, any other devices connected to external +5V e.g. PanelDue may be damaged. Even small '9g' servos may be able to do this.

On Duet 3 Mini 5+, the internal and external 5V rails are separated, however the built-in 5V regulator regulates the internal 5V power. So a servo pumping power into external 5V won't damage the Duet or cause it to reset, however it could damage other devices powered from external +5V e.g. PanelDue or 12864 display.

In RRF 3.x and later, pins are undefined at startup. Before you can use M42 or M280, you must create a GPIO port using M950. Then in the M42 command, the P parameter is the GPIO port number, not the logical pin number. Duet 2 supports up to 10 GPIO ports, numbered 0 to 9. No GPIO ports are allocated by default.

For a list of pin names, see RRF3 Pin names.

Starting with firmware version 1.16, pin numbers in the M42 command are logical pin numbers as listed below, not Arduino-like pin numbers. The M280 servo control command uses a subset of the same pin numbers.

To see where these pins are on the 2nd Generation Duets, see the Duet wiring diagrams

The miscellaneous pin numbers 60-63 correspond to the CS5-CS8 pins on the expansion connector. These were originally allocated for use as the E2-E6 endstop pins and are labelled as such on the expansion connector, but they are now used to address thermocouple and PT100 daughter boards on a Duex 2 or Duex 5 instead. Because most users don't need more than the four thermocouple and PT100 channels supported on the Duet 2, we make CS5-8 available as general purpose I/O if you do not have any daughter boards fitted to the Duex 2 or 5.

It will be helpful to refer to the wiring diagram for the Duet 2 Wifi/Ethernet and the Duex to identify the pins.

Here is the mapping between pin numbers, signal names, and the labels on the expansion connector:

Logical pins 64 and 65 are supported in firmware 2.01 and later only. Note that the Z_PROB_MOD pin is driven automatically when some Z probe modes are selected.

It would be helpful to refer to the wiring diagram for the Duet 2 Maestro to identify the pins.

The mapping between logical pin numbers for miscellaneous pins and the corresponding signal names on the expansion connector is as follows.

How to connect Duet 2 WiFi to 3 servo drivers?

Is there any way to use servo motors with Duet 3 6HC , for moving axis? Or any other way to use intermediate device to operate a servo ? Any way we can use external circuitry to use pulse and direction outputs to connect to different motor other than stepper motor?

Hey Jayshree. The Step/direction pins on the 6HC are not available for external step/servo drivers however we have the 1XD to connect an external stepper of servo motor:

Is there anyway to remap the z probe input pin?