Skip to main content
WARNING! From February 2022, these pages are no longer maintained.
Please see the current Duet3D documentation at https://docs.duet3d.com/
Macros

A work in progress page for useful gcode macros.

RepRapFirmware allows for gcode sequences, called macros, to be stored on the SD card. these macros can then be called by entering :

Macros can be called from any source of gcode: the console, from a gcode printing off the SD card, from the PanelDue and from another user or system macro. DuetWebControl makes it easy to upload, edit and create new macros.

Macros also allow for naming gcodes with easier to remember names. For example you can create a Macro for "Allow Cold Extrude" to call M302 P1.

The macro folder can divided into sub directories to more easily organise your macros by type. 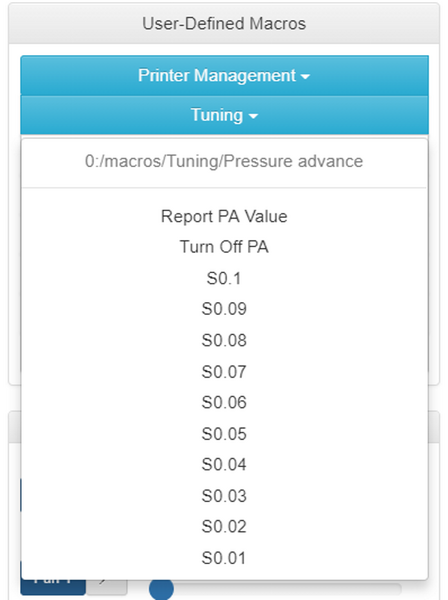 System files are also effectively macros, for example homing files are a sequence of gcodes to run the specific homing sequence for a specific printer type. See here for information on using tool change macros

The RepRap wikialso contains a page of useful macros.

RepRapFirmware configurator will produce appropriate system macros for most basic printer types. These are generally a good start point.

There is a github repository here for macros.

It is a work in progress. Please submit pull requests or comment on the forum if you have example macros to share.

Macros can be used to complement printer "start gcode" and "end gcode", for example if you have different printers, with different start and ends sequences, but you want to use the same sliced gcode, you could use

see Filaments, specific load and unload macros can be defined by filament type.

Calibration and tuning printer settings often requires repeating the same steps repeatedly, changing one variable at a time. Macros can help automate this.

Example: Measuring the Z axis for a Z max endstop and saving the result

Here is an example macro that uses the M500 function to measure and save the length of the Z axis using the Z max endstop.

It is possible to use macros to make the PanelDue beeper play simple tunes by using the M300 (play beep) gcode and the G4 (dwell) gcodes.

Note, all these macros are in /sys/ on the SD card unless otherwise noted

Homing macros depend on the type of printer you are using. See:

Deploying and retracting the probe

If you have a z probe that must be deployed before probing and retracted afterwards use deployprobe.g and retractprobe.g to call the appropriate deploy and retract commands. These are called by M401 - Deploy z probe, M402 - Retract z probe.

Note: If you do not have a Z probe that needs to deploy or retract you must not have these files in the /sys/ directory

In RepRapFirmware 3.2 and later, mesh.g is run in response to a G29 command with no parameters. If file mesh.g is not found then it behaves like G29 S0 instead.

There are normally three specified tool change macros (any of which can contain no commands if desired) that execute in this order:

The Duet can be configured to detect a power failure and store the current state once the power returns if a user wants to resume the print resurrect-prologue.g is run that would contain user commands to home the printer etc before resuming.

M581 can be used to setup the external triggers (switches etc). These triggers carry out actions defined in trigger#.g

From RRF3.1.0 and later the file /sys/daemon.g can be used to execute regular tasks. The firmware looks for the file, if the file exists it executes it and once the end of file is reached it waits. If the file is not found it waits and then looks for it again. In RRF 3.3 The wait time was increased form 1 second to 10 seconds. If you want a shorter update time then put a while loop inside the deamon.g with G4 S1 in it for 1 second repeats.

This can be used in combination with Conditional Gcode to check the object model to look for a particular condition, and then take an action.

Caution must be taken not to start a loop that takes a long time to complete, without having a G4 P500 or similar command to hand control back to the main process every half a second or so.

File runonce.g is supported from RRF3.1.0 and later. If this file is present at startup, it is run after running config.g and activating the network, and then deleted.