WARNING! From February 2022, these pages are no longer maintained.
Please see the current Duet3D documentation at https://docs.duet3d.com/
Installing and Updating Firmware (Legacy)

Please use these updated instructions instead:

Notes before you start 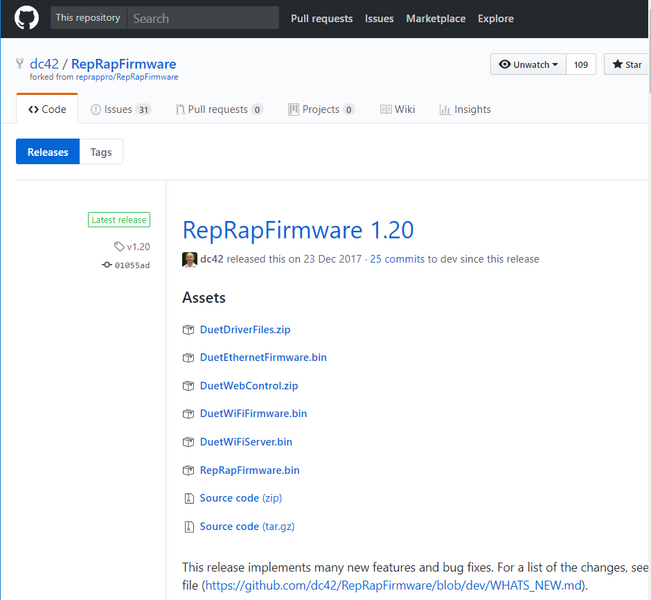 If you are unable to connect to your Duet from a browser, but you can connect to the Duet via USB using Pronterface or YAT etc:

Use caution when connecting your Duet to a PC via USB while VIN is still connected as this may lead to a ground loop situation See here for more details: USB ground loops

Note: when you run M997 S0, if your board is a Duet WiFi or Ethernet running old firmware, you may get an error message telling you that file DuetWiFiFirmware.bin or DuetEthernetFirmware.bin was not found. If that happens, copy or rename the Duet2CombinedFirmware.bin file to that filename and try again.

If you can’t connect to the board via USB/Pronterface:

Only use this if the firmware on the Duet 2 has been corrupted, or if you have accidentally pressed the Erase button, so you can’t connect over USB with Pronterface even with WiFi disabled in config.g.

Use caution when connecting your Duet to a PC via USB while VIN is still connected as this may lead to a ground loop situation See here for more details: USB ground loops

Before proceeding, connect the Duet to your PC using a USB cable and check whether the Duet is visible in the port list. Under Windows you can do this by going to Device Manager and expanding Ports (COM and LPT). If Duet 3D printer electronics is listed, you should be able to connect using Pronterface or YAT unless some other program is already using the port. If Bossa Port is listed then the firmware has already been erased. If neither is listed:

If you get the Duet 3D printer electronics port to appear, then firmware is already running on the Duet and you should use fallback procedure #1 or #2 instead. If you get Bossa Port, read on.

You will need a Windows or Linux PC. 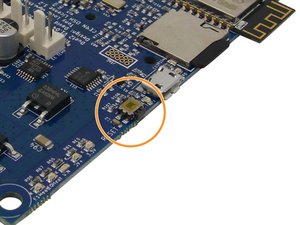 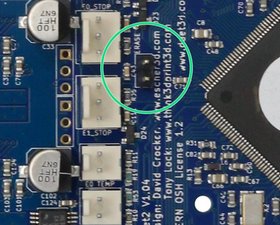 Important: if you are also upgrading RepRapFirmware (which for the Duet 2 WiFi is DuetWiFiFirmware.bin for version 1.20 or earlier and Duet2CombinedFirmware.bin for 1.21 and later) you should normally upgrade that first.

Note, this does not apply to the Duet Ethernet or Duet Maestro.

If your Duet 2 WiFi is running main firmware 1.19 or later:

If your Duet 2 WiFi is running firmware 1.18 or earlier:

Note we recommend upgrading to 1.21 or later stable firmware, these steps will work but later versions of DWC will have compatibility issues with older firmware

Updating more than one firmware at a time

If you need to upgrade more than one of DuetWiFiFirmware/DuetEthernetFirmware, DuetWiFiServer and Duet Web Control, do them in this order:

In firmware version 1.19 for the Duet 2 WiFi the webserver functionality has been moved off the Wifi module onto the Duet main processor. This means that the updates to the main firmware and the Wifi firmware need to be synchronised, and the DuetWebControl files are read from the SD card instead of being uploaded to the Wifi module. Also the network SSID and password are sent to the WiFi module using gcodes. So upgrading from earlier firmware versions is not as straightforward as usual.

If you are already running 1.19beta or RC version of DuetWiFiFirmware and DuetWiFiServer, you can upgrade them the 1.19 release individually through the web interface in the usual way.

Getting ready to upgrade

Get ready to upgrade the Duet 2 WiFi by putting the following files on the SD card:

Note: if you move the SD card to a PC to change the files on it, you should restart the Duet after you put the SD card back in it.

Upgrading a Duet 2 WiFi or Ethernet from firmware 1.20 or earlier to 1.21 or later

If you have an older Duet 2 board then you should also upgrade the iap4e.bin file to the current version, to ensure that future firmware upgrades go smoothly.

Upgrading a Duet WiFi/Ethernet/Maestro from firmware 2.x to 3.01 or later

Important! When upgrading from 1.x or 2.x firmware to 3.x you will need to make substantial changes to your config.g file. See RepRapFirmware 3 overview.

If you install incompatible main firmware (Duet2CombinedFirmware.bin or DuetWiFiFirmware.bin) and WiFi server (DuetWiFiServer.bin) versions, then you will not be able to connect over WiFi, and when the WiFi module is enabled you might not be able to communicate via USB either. Here's how to recover.

Copy files to the SD card