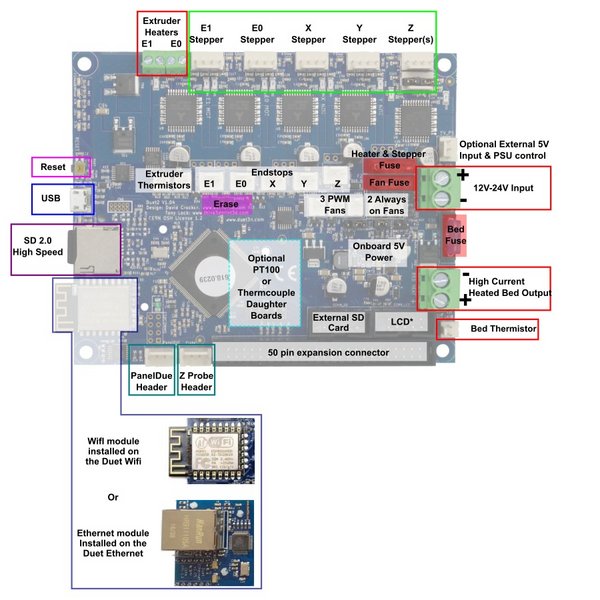 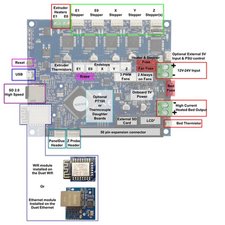 Author: Filastruder (and 6 other contributors)

The Duet 2 Wifi and Ethernet are 2nd generation Duet 3D printer electronics. The main hardware features are listed below. 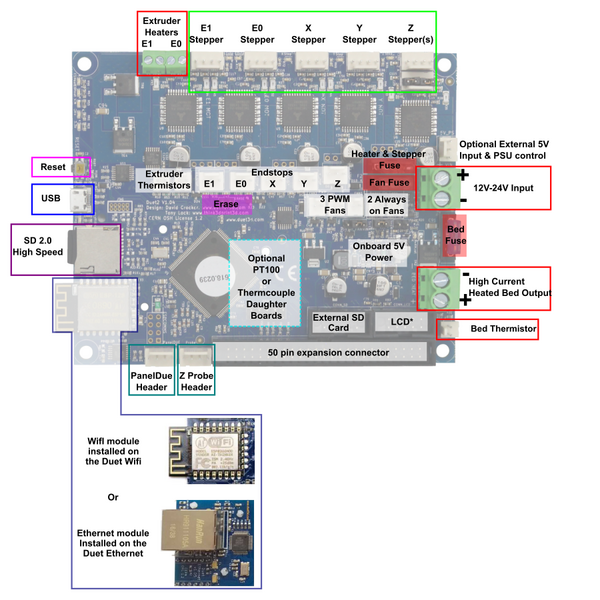 The feature diagram for V1.03 and earlier is below

Note: At high currents, it is essential to use either ferrules or solid core wire with the terminal blocks on the Duet 2 and DueX.

For wiring and pinout of the board, see Duet 2 WiFi and Ethernet wiring diagrams.

Duet 2 WiFi and Ethernet boards have four 4mm clearance holes at the corners of the board. You can use M4 screws to attach the board to a panel or an enclosure. The hole patterns / mounting centres are 115mm x 92mm, full dimensions are shown in the diagrams: 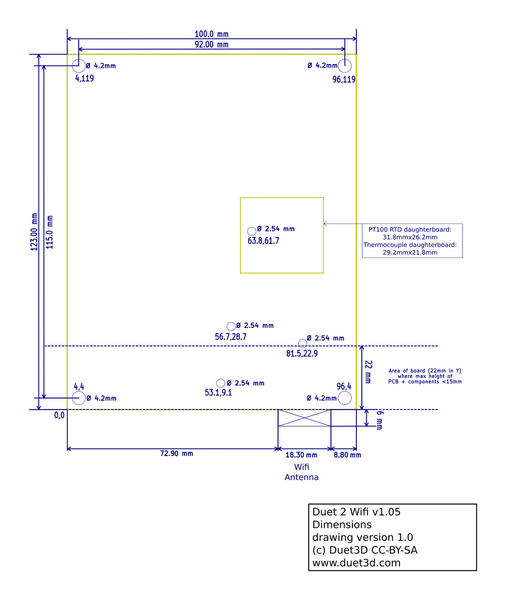 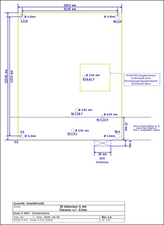 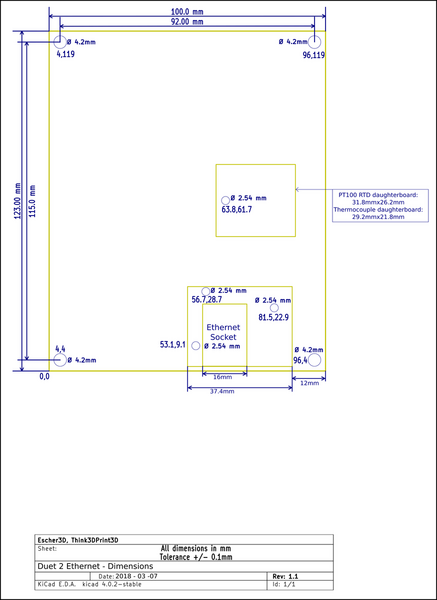 The PCB is designed to transfer heat from the stepper drivers and power mosfets to the underside of the board. Therefore your mounting method should encourage good airflow underneath the board.

If you mount the board vertically, make sure that cool air can enter at the bottom of the board, flow upwards behind the board, and escape at the top. Convection cooling will usually be sufficient, but if you are using high stepper motor currents then you may wish to add a fan below the board to encourage the upward flow of air. Make the spacing between the back of the board and the panel or enclosure large enough to allow a good flow of air.

If you mount the board horizontally then a cooling fan is recommended, especially if there are other heat-generating components in the vicinity such as power supplies, SSRs or stepper motors. Position the fan to blow air underneath the board (preferably along the top as well), especially along the row of stepper driver chips and between the power input and bed heater terminal blocks.

Important! The higher the motor currents you set, the more important it is to cool the board. Always use a cooling fan if you run a Duet 2 Wifi or Duet 2 Ethernet above 2.0A motor current.

Phil Maddox has created a 3d model of the Duet 2 Wifi hosted here:

Giuliano Moschini has created a model based on the Duet 2 WiFi model for the Duet 2 Ethernet:

The Duex CAD file is here, thanks to Morten Nielsen for making this version:

The boards all support connection to a computer over USB, using any standard 3D printer host control program. The Duet 2 WiFi can also connect to a secure WiFi network, while the Duet 2 Ethernet, Duet 0.8.5 and 0.6 have an Ethernet port. The primary way to control these boards is with a web interface controlled through the network. Although they have removable on-board SD cards, the network interfaces provide fast enough file transfer that it is generally preferable never to remove the on-board SD card.

The boards also support a colour touchscreen called the PanelDue.

The Duet boards run on two basic power circuits. The digital electronics are supplied by a 5V circuit, which is internally converted down to the 3.3V levels that drive the MCU. This circuit also drives all the LEDs and sensors, and can be configured to feed the fans. The high-power devices, specifically the stepper motors and the heaters, are powered by a higher voltage, typically 12 or 24 V. This 12/24V circuit can be switched on and off through the PS_ON pin, if the power supply supports this (it may be a good idea to add such support through a relay, for safety reasons, if it doesn't) without interfering with the MCU at all. Alternatively, the Duet boards can draw power from this circuit to power the 5V circuit.

From Version 1.04 onwards the Duet 2 is fitted with 3 blade fuses:

The Duet 2 (WiFi and Ethernet) can drive 5 independent stepper motors. It uses Trinamic TMC2660 stepper drivers, which in addition to the standard step/direction/enable interface provide additional functionality (for example digital current selection and interpolation between microsteps) through SPI. If these chips become damaged or if users wish to use different drivers (for example supporting higher currents) then 5 additional channels of step/direction/enable pins are available on the expansion connector. With the onboard stepper drivers, it is possible to connect multiple motors in series; a connector is provided to make this convenient for the Z axis.

The Duet 2 (WiFi and Ethernet) provides connectors for one endstop for each axis; these can be simple microswitches (normally open or normally closed) or they can be more complicated boards (for example optical switches) so long as they run off 3.3 V and can provide a digital (on/off) output. Additional endstop pins are available on the expansion connector. Any of these endstop pins can also be configured to trigger user-defined actions, for example as a filament-out sensor or emergency-stop button.

The Duet 2 (WiFi and Ethernet) supports power distribution to and control of three heaters: a heated bed (assumed to be the highest current draw with a maximum of 18A) and two extruder heaters. These are fed from the 12/24V circuit, but the PWM switching is carried out by MOSFETs on the ground, so if necessary they can be run off different voltages. Very high power bed heaters should probably be supplied independently and switched with a SSR.

Alongside each heater there is a temperature sensor input. These can be connected directly to thermistors (whose properties are set in the printer configuration files) or via expansion boards to PT100 sensors or thermocouples.

The Duet 2 (WiFi and Ethernet) also provides connectors for several fans, some always-on and some PWM-controlled. These can be supplied with 12/24V or with 5V, or (since again the switching is by MOSFETs on the ground line) if necessary from user-supplied power inputs.

The MCU driving the Duet boards has considerably more inputs and outputs than are used on the main board. Many additional lines are available on an expansion connector.

For the Duet2 the Duex 2 and Duex 5 expansion boards add 2 and 5 extra channels respectively. There are 2 more channels available on the CONN_LCD header, giving a total of 12 stepper channels.

See the Duet 2 WiFi and Ethernet wiring diagrams for the expansion connector pinout.

When on external 5V power with no connected devices drawing power from the 3.3V or 5V supplies, both the Duet 2 WiFi and Ethernet draw about 200mA average from the 5V supply with the network interface enabled. For the Duet 2 WiFi, the peak current when transmitting may be in excess of 300mA.

The board has a number of on board LEDs which are used to indicate the state of power, endstop switches, heaters etc: 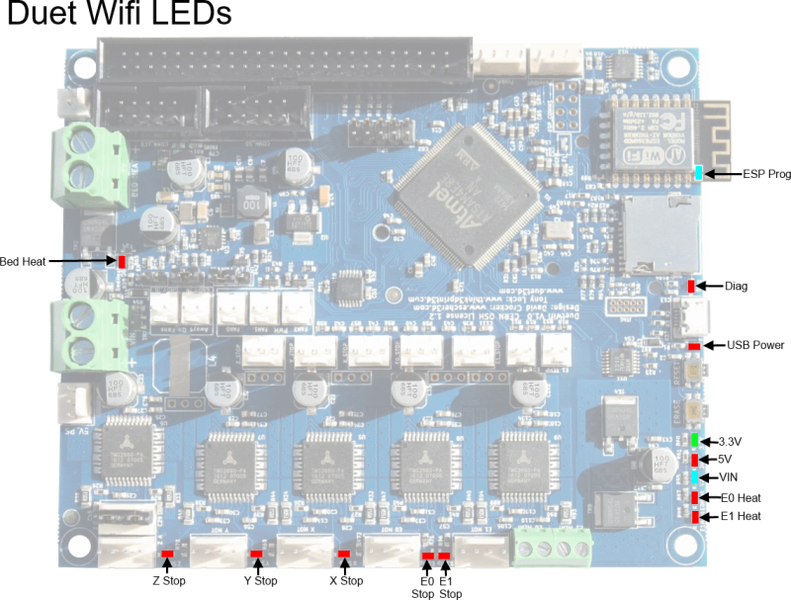 The Duet 2 Wifi and Duet 2 Ethernet both use the same Duet 2 base controller board. The difference is only in the communications module. This base controller board has gone through a number of PCB design revisions. The revision number is marked on the silkscreen on the board, to the left of the large processor chip. the linked page has more information on the Version Numbering system.

Compared to PCB revision v1.03 the following changes have been implemented:

Note: 1.04 Duet WiFi/Ethernet boards manufactured in June/July 2018 had the incorrect resistor value fitted at position R107 (10K instead of 100R). On these boards, the external reset pin on the expansion connector will not work. This can be remedied by soldering a 100R 0603 resistor on top of the existing one at position R107.

The feature diagram for PCB revision v1.03 and earlier is below 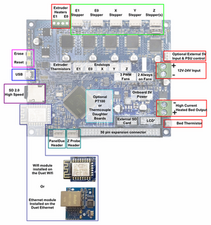 Compared to PCB revision v1.02 the following changes have been implemented:

Compared to PCB revision v1.01 it had the following changes:

Compared to PCB revision v1.0 it had the following changes:

The first production version. Compared to the prototype it had the following changes:

This board is identifiable by the white solder-mask (all other boards are blue) it was made in a limited production run compared the version.

An updated and expanded version of the Duet 0.6, called the Duet 0.8.5 (multiple unreleased versions came in between) was released in Aug 2015.

More details are available of the RepRap wiki here:

The source files are here

The first duet released was version 0.6, developed by Think3dPrint3d and RepRapPro in 2013. More details are available on the RepRap Wiki:

The source files are here:

Hardware difference between Duet 2 and Duet 0.8.5

The Duet 2 WiFi and Duet 2 Ethernet provide the following hardware improvements over the Duet 0.8.5:

See the Duet family of motion control electronics page for a feature comparison table between different versions of the Duet 2.

Hi, would be great if someone can elaborate on the max Watt or A/V-combination, that e0 & e1 can deliver.

I would like to drive a led-stripe with one of the unused extruder-heaters and have to know what it can draw there without a problem. Would be great…

I am looking to make a 3D printer with high positional accuracy and positional feedback using servo motors (NEMA 17 with rotary encoders).

We need to be able to detect missed steps, support power loss recovery, and diagnose other problems as a start.

Would the 50 pin expansion be able to support this?

Would I need to use external drivers?

Hi, I've searched on this website and found these drivers are designed for the servo motors. https://www.omc-stepperonline.com/closed...

Can anyone tell me what the max pulse rate that the Duet 2 Ethernet or WiFi is capable of pruducing?

please use the forum for support.: