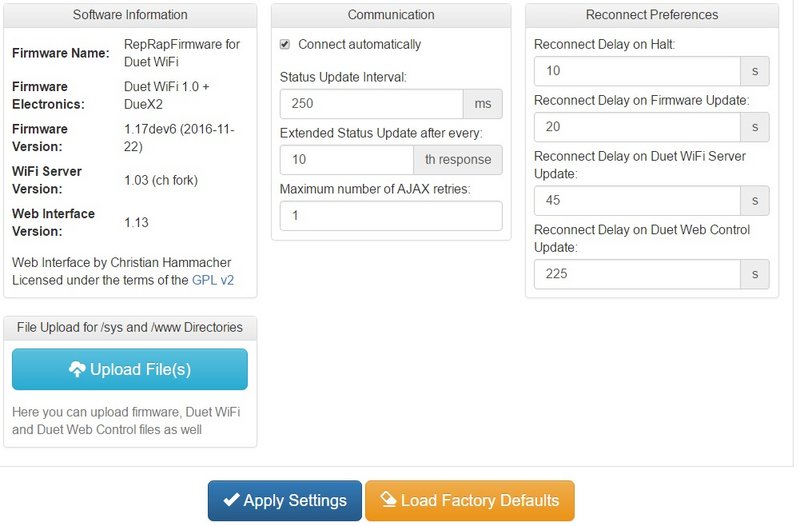 RepRapFirmware is a comprehensive motion control firmware intended primarily for controlling 3D printers, but with applications in laser engraving/cutting and CNC too. Unlike most other 3D printer firmwares, it is targeted only at modern 32-bit processors, not outdated 8-bit processors with limited CPU power. So it is designed to make good use of the power of modern inexpensive ARM processors to implement advanced features. It is configured with human editable files located on an SD-card plugged into the printer electronics. As such, there is no need for ordinary users to compile the software nor install any development tools.

RepRapFirmware was the first open-source firmware to implement significant advances in 3D printing, including:

To check the firmware versions, go to the Settings page of Duet Web Control and select the General tab. You should see a box listing the versions of the three firmware files, like this: 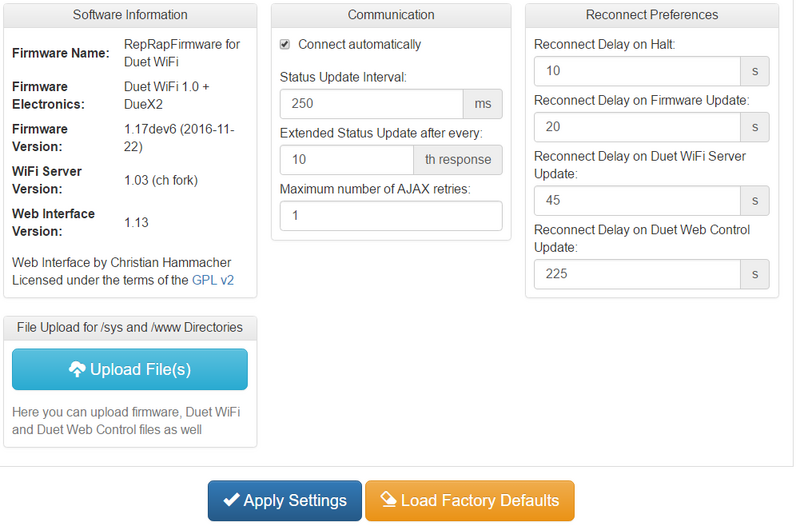 For production Duet 2 WiFi and Ethernet boards, the minimum recommended version of RepRapFirmware, DuetWifiServer (on the Duet 2 Wifi) and DuetWebControl are:

Duet 2 boards are shipped with RepRapFirmware installed however are advised check the version installed and if required to upgrade to the latest stable version. To upgrade firmware see the Installing and Updating Firmware page.

Checking versions when not on the network yet

If you cannot get onto DuetWebControl yet because the network is not setup then connect using YAT or another terminal program and use M115 to get a print out of the versions.

Where to get firmware, software and drivers

Duet 3 boards run RepRapFirmware 3 , RRF 2 is not compatible with them. If you are running a Duet 3 Mainboard or Mini using an attached Single Board Computer (SBC) then the firmware update process is part of updating the Duet Software Framework on the SBC. Please see here for more details: Getting Started With Duet 3

If you are running a Duet 3 Mainboard or Mini in stand alone mode (booting of an SD card and using the attached network) then the process is similar to Duet 2. It is highly recommended to read all the notes on the version of firmware you are looking to upgrade to.

It is highly recommended to read all the notes on the version of firmware you are looking to upgrade to.

You will also find the appropriate versions of DuetWebControl there (copied from chrishamm's github repository). The files to download depend on which Duet you have.

Firmware files for older boards are currently also at https://github.com/dc42/RepRapFirmware/r....

If you are looking for a version of DuetWebControl that is not associated with a particular release, look in chrishamm's repository at https://github.com/chrishamm/DuetWebCont....

Chrishamm also maintains a fork of RepRapFirmware, his releases are at https://github.com/chrishamm/RepRapFirmw....

See the wiki page on Installing and Updating Firmware

These Duets use the following folder structure:

Folder /gcodes is used to hold g-code files for printing. You can use subfolders of /gcodes to organize these files. G-code files can also be located on an external SD card if one is connected.

Folder /macros is used to hold used-defined macro files. The names of these files appear as menu entries in DuetWebControl and on PanelDue. You can use subfolders of /macros to organize these files. See Macros for examples of useful user macros.

Folder /menu. This holds the files that define the menu layouts for 128x64 pixel monochrome displays. Compatible with Duet 3 mini 5+ and Duet 2 Maestro

Folder /sys is used to hold system configuration files and, in all firmware versions before RRF 3.3, firmware update files ready for installation. It should contain at least the following files:

The config tool can be used to setup these files for your printer type: https://configtool.reprapfirmware.org/St...

The /www folder and its subfolders hold the files served by the web server. If you are setting up a new SD card, populate the /www folder by extracting the contents of the DuetWebControl.zip file to it.

NOTE: the folders /firmware, /gcodes, /macros, /menu, /sys, and /www must be named exactly as shown. Often the distribution of configuration for a specific printer platform will come with the folder named /sys-<printer_type> the -<printer_type> must be removed.

More information on where to get the firmware files and Duet Web Control files is explained lower down on this in the where to get firmware, software and drivers section.

The Duet 2 WiFi with pre-1.19 firmware requires the following folders on the internal SD card:

These folders have the same function as described earlier on this page. The web server files are stored in file DuetWebControl.bin which is uploaded to the WiFi module.

Changes to config gcodes and firmware behaviour between Duet 2 and Duet 0.8.5 / 0.6

Version 1.19 firmware used with DuetWebControl 1. 19 had the following known issues and limitations:

The Duet control board supports printing your gcode files over a USB connection streamed by a gcode sender software like those mentioned in the title. However, there are limitations, including, but not limited to:

It is strongly recommended that you use the Duet Web Control for machine control and the internal SD card for gcode printing, however, if your application requires printing over USB, such as using the Mosaic Palette, it will work as expected, with the above limitations.

Do you know if a Duet board is installed in the printer AlfaWise U20 One and if yes which model is it?

Sorry if it’s the not good place for this question…

Can I please just have somewhere so I can download firmware every link I go on it just gives a link for release notes of latest version.

Peter the link above to RepRapFirmware Releases (https://github.com/dc42/RepRapFirmware/r...) takes you to the latest firmware.

The SD card structure should now also contain a directory /filaments. If that folder is not present on the SD card when you try to add a filament, an error is thrown.