Skip to main content
WARNING! From February 2022, these pages are no longer maintained.
Please see the current Duet3D documentation at https://docs.duet3d.com/
Connecting and configuring fans

The Duet supports a variety of fans. Two-, three-and four- wire PWM-capable fans, running at voltages of 5V, 12V, VIN or an externally-supplied voltage (depending on Duet board). Fans can be always-on, thermostatically-controlled, and/or G-code controlled.

This document is relevant to: all Duet boards

If you connect the fan the wrong way round, you may damage the fan, the Duet, or both.

Fans are first defined and configured by M950, then operated by M106.

Most Duet boards provide at least one connector for fans that should be on any time the power is on. Many setup guides suggest this is how you should wire your hot end fan (but see thermostatic fans, below) to prevent heat from creeping back and melting the filament, jamming the hot end. You may also wish to attach a fan to move air across the underside of the Duet board, keeping the stepper drivers cool. Simply plug any such fan into one of these sockets, connecting the red wire to V_FAN and the black wire to GND.

If you want to run your other fans on a Duet 2 from 5V but your always-on fans from 12/24V, you can wire them directly across the power supply pins and ignore the Duet's connectors.

As mentioned above, many hot ends require a fan to keep the heatsink cool, so that the filament remains solid until it passes through the heat break into the melt zone. This fan should be on any time the hot end is hot enough to melt plastic, but can safely be off when the hot end is cool even if the rest of the machine is on. Duet boards support this mode of operation. Plug your fan into one of the PWM fan pins, and configure it as a thermostatic fan for the appropriate heater by putting the appropriate M106 G-code in config.g. For example:

This sets fan 1 to run any time the temperature of heater 1 is above 45 Celsius. See M106 for details. We recommend you use the FAN1 connector for a thermostatically-controlled hot end fan, because on the Duet 2 WiFi / Ethernet in RRF 2.x it defaults to being on at power up , to provide maximum safety if you restart your Duet when the hot end is hot.

A thermostatically controlled hot end fan will be turned on automatically when you auto tune any heater that it monitors.

Printing PLA (and perhaps other plastics) benefits from additional cooling of printed layers, particularly when layers are printing quickly. That said, excessive cooling can cause problems with first layer adhesion or even interfere with a new layer's bonding to the previous one. Many slicer programs will introduce fan control G-codes to run the fan strongly for layers that print quickly, and only start running the fan after the first few layers. Attach/define such a fan to one of the connectors FAN0, FAN1, or FAN2. If your slicer doesn't support specifying which fan to control, it defaults to FAN0.

In RRF 2.x, on Duet 2 WiFi/Ethernet, FAN1 is set up as a thermostatically-controlled fan by default because it is typically used to control the hot end heatsink fan. To use it as a normal controlled fan, you must first cancel thermostatic mode by sending M106 P1 H-1.

Most slicers do not yet support having multiple separate print cooling fans so they simply send M106 Snnn, rather than allowing the choice of which fan is allocated to which hotend.

To solve this, other fan channels can be mapped to fan 0 when a specific tool is selected for example:

For more examples see the tool definition section of the config.g file.

4-wire fans have a separate PWM input wire and an RPM sensor.

On Duet 3, there are 4-pin fan headers specifically for these kinds of fan, and the fan should plug straight in.

On Duet 2, the recommended connections are:

The PWM signal needs to inverted for a 4-wire fan, so:

RepRapFirmware 1.x and 2.x: In the M106 command for that fan, use the I1 parameter to correct the PWM sense, e.g.:

If you need to use 12V fans but your VIN is 24V and all your fans are 12V, then on the Duet 2 Wifi / Ethernet you have the following options using a buck-down converter: 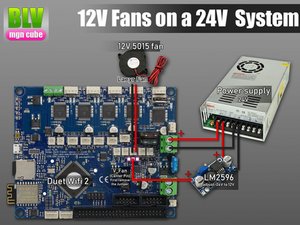 When using mixed fan voltages, the voltage fed to the centre pin of the V_FAN jumper must be the highest fan voltage in use. You can use a lower voltage fan in the same system by connecting the positive fan wire to the lower voltage supply (e.g. +12V from a buck regulator) and the negative fan wire to the FAN- pin of your chosen fan connector (leave the VFAN pin of that connector not connected).

3 the connection of a 12V fan is more complicated, but you can use 24V fans as well. The buck regulator input is fuse protected

Using a fan connector as a general purpose output

If you use the I-1 parameter in the M106 command for a fan, then the fan is disabled which frees up the pin for use as a general purpose I/O pin that can be controlled using M42.

If I delete “S0” then Fan work properly, how expected, on full rotating speed.

I mean, Config Tool should be adjusted.

Hi, having managed to connect a fan incorrectly “Fan 0” no longer works. Fans 1 and 2 are ok so I can manage to use the board with my current configuration. And at a push I could connect the all ways on fans, but it would be useful to know the feasibility of replacing the hardware component, is it fan specific? Thanks

It would depend on what has failed. Likely a mosfet. Best to start a thread in the forum for more details. https://forum.duet3d.com/

i will do an experiment with a recycling fan. I hope it doesn't take off. ?

sorry, in the instructions on how to connect a 12 volt fan with a 24 volt Vin, I did not read the possibility of connecting the fan in a standard way by varying only the maximum PWM e.g .: fan at 12 volts, Vin at 24 volts, PWM max 50%. Am I wrong? am I missing something?