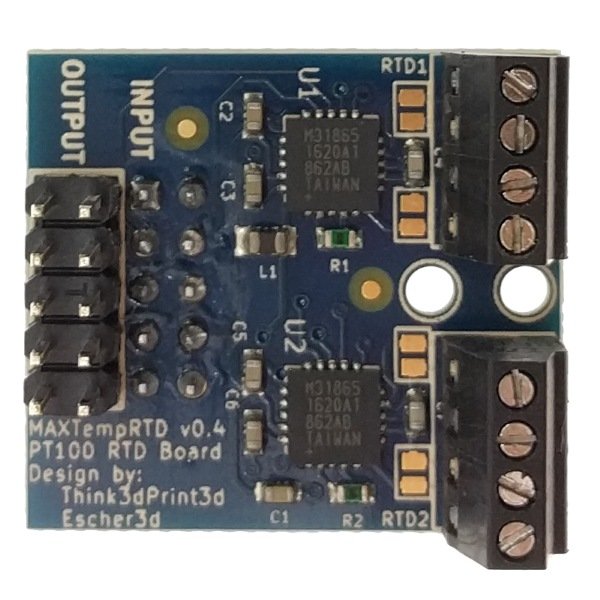 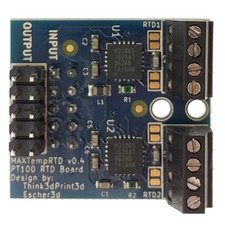 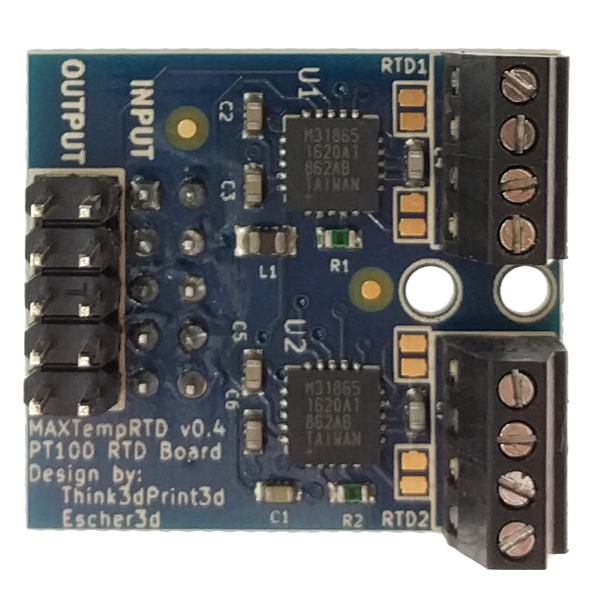 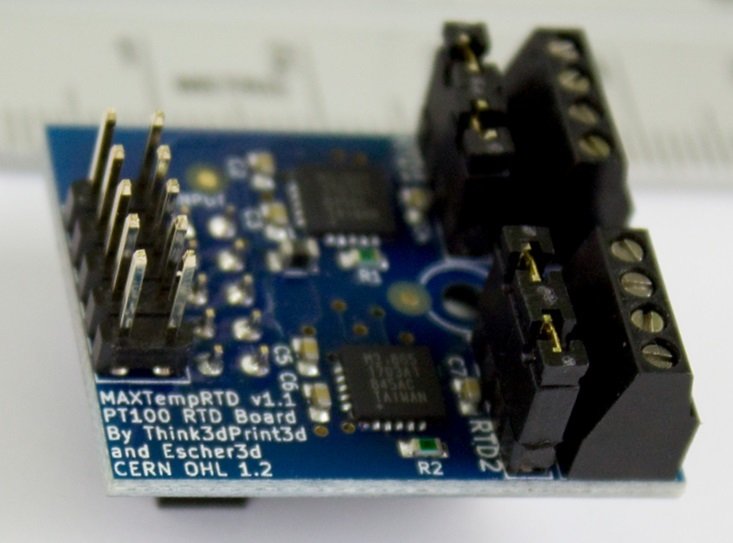 Each channel of the PT100 daughter board has a 4-position terminal block. We'll number the terminals 1, 2, 3 and 4 in order (it doesn't matter which end you start from, because PT100 sensors don't care about polarity). Terminals 1 and 4 supply current to the sensor, and the voltage developed across the sensor is measured between the terminals 2 and 3.

To test the functionality of one of the PT100 channels

Purchase a third-party MAX31865-based PT100 interface board. The Duet uses 3.3V signalling, so get a board without 5V level shifters. The reference resistor on the board should be 400 ohms. RepRapFirmware versions 1.20 and later also allow the use of other values of the reference resistor, such as 430 ohms. 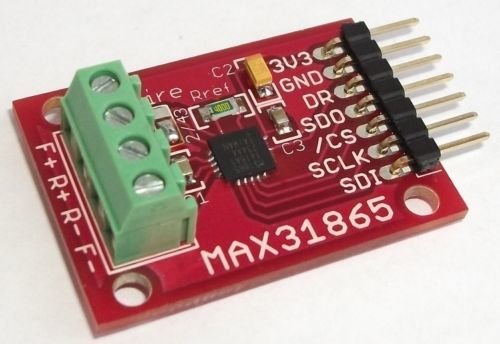 These boards are readily available on eBay. You will need one MAX31865 for each RTD sensor you want to connect. You can also buy boards with two MAX31865 chips, providing two channels on a single board.

Connect the CS pin to one of the pins listed above, a different one for each MAX31865 board. The pins listed are for temperature sensor channels 200, 201, 202 and 203 respectively. If you have Roland mill support enabled in the firmware, only two channels (200 and 201) are available because the mill uses the other two pins.

Your RTD interface board may also have a DR (Data Ready) pin. Leave it unconnected.

The communication between the Duet and the RTD interface board uses 4MHz SPI signalling, so the wires should be kept short.

This tells the firmware that for heater 1 (which is normally the first hot end heater) it should sense the temperature using the PT100 board whose CS pin is connected to NPCS0. The S, T, B, H and L parameters of the M305 command are not used. In firmware 1.20 and later, you can optionally use the R parameter to specify the value of the reference resistor if it is not 400 ohms.

The daughter board comes with a 100Ω resistor that you can wire in place of a two wire sensor to check the board is working correctly. With the resistor in place, the reading should be 0°C.

If the reading at room temperature is higher than it should be, then you probably have a bad connection between the RTD interface board and the sensor, or the wires to the sensor are too long or too thin. Each additional ohm of wiring resistance will increase the temperature reading by 2.5C. Using a 4 wire solution PT100 sensor will improve this. If you only have a 2 wire P100 sensor you can still improve the accuracy by using 4 wires for the majority of the distance as https://miscsolutions.wordpress.com/2016...

Okay, Tony, thank you for your reply.

Last night, I tested the resistance of PT100 and 100Ω. The test was successful.

In config.g, the port RID2 was incorrectly configured as spi.cs1.

And sort out the relevant information:

Hello, please use the forum for support:

My PT100 sensor is giving a value slightly higher than the other 2 sensors in my enclosure. Actually the other 2 are exactly the same reading:

Please post support questions in the forum. It’s far more likely to be seen there. https://forum.duet3d.com/