Skip to main content
WARNING! From February 2022, these pages are no longer maintained.
Please see the current Duet3D documentation at https://docs.duet3d.com/
CNC Pendant 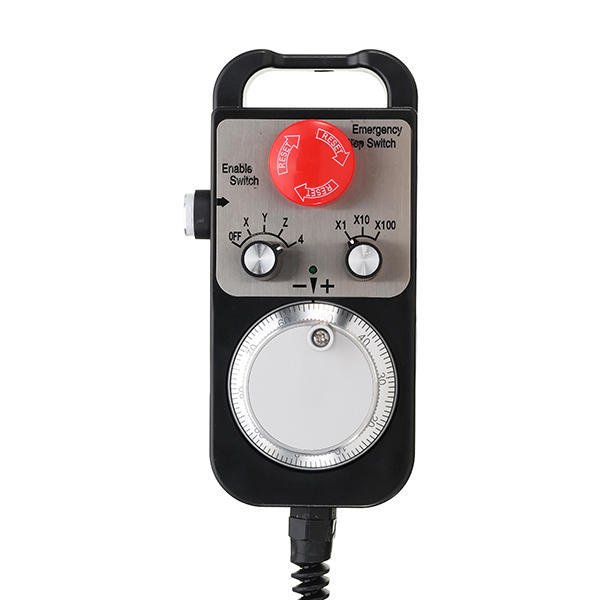 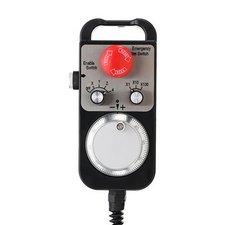 Author: David Crocker (and one other contributor)

This is a DIY project to interface a popular style of CNC pendant to the PanelDue port of a Duet 3, Duet WiFi, Duet Ethernet or Duet Maestro.

Install Arduino 1.8.1 on your PC and create a new sketch called CNC-pendant. Then download all the files from the /src folder of https://github.com/Duet3D/CNC-Pendant-Fi... and put them in your sketch folder, overwriting the file CNC-pendant.ino file already there. Select board type Arduino Micro, connect the Arduino to your PC via USB, and program the sketch in it. 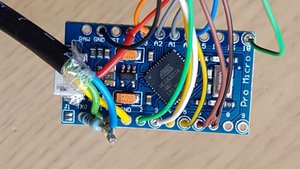 The cut ends of the original 18- or 20 core cable, and the cores of the 4-core cable, must be connected to the Arduino Pro Micro as listed at https://github.com/Duet3D/CNC-Pendant-Fi.... As there are several wires that need to be connected to ground, it's easiest if you connect them together at the ground terminal of the rotary encoder, then run a single ground wire from there to the Arduino. That way you don't need to connect more than one wire to each pad of the Arduino, except that you need to connect both +5V from the 4-core cable and +5V for the encoder to the VCC terminal. 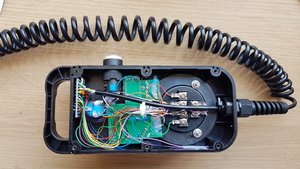 If you do not intend to use a PanelDue at the same time as the pendant, it's best to leave the green wire of the 4-core cable (the one that would be connected to DOUT on the PanelDue) not connected to the Arduino RX0 pin, otherwise it might pick up noise.

The Arduino can then be tucked inside the top of the pendant like this.

Before refitting the back of the pendant, put some Kapton tape or insulating tape over the top two magnets, to prevent them from possibly shorting out connections on the Arduino.

To connect a PanelDue to the port as well as the pendant, the DOUT signal from the PanelDue (which is usually the blue wire in a 4-core cable) must be connected to the RX0 pin of the Arduino in the pendant (which in the wiring list I have given uses the green wire in the 4-core pendant cable). So connect the blue wire from PanelDue to the green wire of the pendant. Connect the DIN (green) PanelDue wire to the UTXD pin of the PanelDue connector on the Duet (or IO_0_OUT if using a Duet 3). The +5V pin on the Duet goes to the +5V (red) wire of both the pendant and the PanelDue, likewise the ground connection goes to the yellow wires of both. 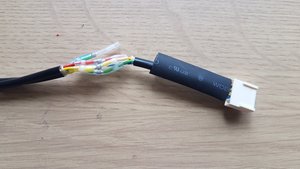 I used solder sleeves to connect the PanelDue and pendant cables to a short length of 4-core cable that plugs into the Duet, as shown here before I shrunk the heatshrink over the joints.

Do you have a video of it working? Been looking for this for 6 months now….

I haven’t done a video yet, but I assure you, it does work.

I made this and it works great for a short time before the wifi on drops on the duet…….Something about the duet output buffers filling up??. Is there an updated Arduino code which resolves this?

Yeah I want to know that too, I have the same problem. I use the G53 G0 X Y to move to the position where I want to start and then finetune with the pendant itself… But I want to be able to use the pendant without limits :-)

Hi which part of the code can we modify to make the cnc go faster, please?

The command strings in table MoveCommands includes an F parameter to set the speed. It uses F600 for the Z axis and F6000 for all other axes. You can increase those values.

David thanks for your reply. One other question. It happened to me as well that when I use the pendant for a while the wifi stops working and I need to reset the machine. I am a software developer but not that familiar with arduino code. I was thinking as well to use the 4 axis to set the machine to call a macro like home. but did not figure it out yet. thanks for all your work your manual was great and it worked imediatly

Any chance we can get the TODO: add schematic soon?

I’m eager to try this out on a Arduino Pro Micro, but unsure on the connections related to TX/RX and the Duet2.

I have the exact same pendant shown above, and the Arduino Pro Micro.

I plan to connect directly to the Duet2.

Looking in the readme.MD it is not 100% clear to me how to connect.

So If anyone has a schematic, that would be awesome.

Do you need to enable it on the duet board? or just plug and play once this guide has been completed?

Glenn, I didn’t add any code to make it work.. It was plug and play, even when the duet was already powered it worked instantly. Maybe it does make a difference when adding this code (jogging too much drops the connection to access the duet web control). Cheers

Do I see commands from the Pedant in the console, to check if it works?

Do I have to press the “Enable Button” on the side of the Pedant while jogging. At the moment only the emergency stop works and the led shines green, or is this no sign for proper connection?

It must be working as the E stop is sent the same way all the other commands are. Yes you need to hold enable while jogging. The console doesn’t show the commands unless there’s an error otherwise it would be flooded with jogging commands.

Is it possible to use the conn_sd connector for the pendant and leave the paneldue on he’s own connector ?