Skip to main content
WARNING! From February 2022, these pages are no longer maintained.
Please see the current Duet3D documentation at https://docs.duet3d.com/
CAN connection

Duet 3 uses a CAN-FD bus to connect expansion and tool boards to the Duet 3 main board (currently Duet 3 MB6HC or Duet 3 Mini). We chose CAN-FD because it is highly tolerant of noise (in particular, the ground noise generated by stepper motors), well-supported by modern microcontrollers, and the FD variant has enough bandwidth to support the high movement command rates needed in 3D printing and some other motion control applications.

The CAN-FD bus is a two-wire bus with 120 ohm nominal impedance. The bus should be terminated by 120 ohm resistors at each end.

The Duet 3 Mini has a 2-pin Molex connector instead of the RJ11 connector, and built-in termination.

The polarity of the connections between boards matters. In all cases, connect CAN_H on one board to CAN_H on the next board, and similarly connect CAN_L to CAN_L. 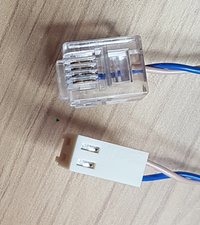 Twisted pair cables terminated in RJ11 connectors are sold in some countries as "High Speed ADSL cables". One supplier of such cables is Kenable.

You can also make up your own cables. Kits of RJ11 (usually 6P4W) connectors and the corresponding assembly tool are readily available. For the cable, you can buy unshielded twisted pair cable (e.g. Lapp 0035101 has two twisted pairs, so suitable for connecting a Tool Board to a Tool Distribution Board); or buy a length of twisted pair ribbon cable and separate it into individual pairs; or for short distances, use telephone cable.

This image shows a cable made to connect a Duet 3 Mini to a Tool Distribution Board.

Example of a good cable: 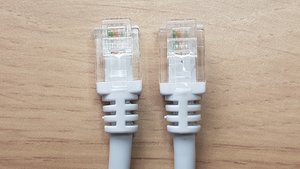 The colours of the wires going to the pins on the right is hard to see because they are white with a stripe, as is usual for twisted pairs; but the order of colours is the same at both ends.

Example of a bad cable: 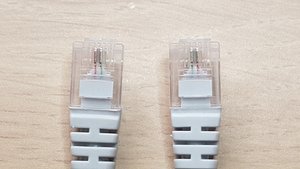 Having just the middle 2 pins wired is OK, but they are crossed so this cable is no good for CAN (it's a cable that was supplied with an ADSL or DSL modem). This is common for cables made from non-twisted-pair cable that is either flat with a seam on one side, or half-round.

In Duet 3 systems, each board has a CAN address, which is a number in the range 0 to 126. Each board must have a unique CAN address. The address of the main board is always 0. You can choose the addresses of the expansion and tool boards as you wish, however we suggest the following:

- Use addresses 1 to 15 for EXP3HC expansion boards

- Use addresses 40 to 59 for external driver boards

The Tool Distribution Board is purely passive and does not have a CAN address.

The EXP3HC expansion board has a 4-bank DIP switch to set the address. The CAN address is set by the switches as follows:

If you have just one of these boards (or at most one of each type) in your system, you can leave the address set to the default. Otherwise you should change the addresses of every board. To do this:

The red LED behaviour is:

Factory resetting a tool or expansion board

If you need to factory reset a board:

The board will reset its address and CAN bus speed to default and request firmware from the main board.

What would be the maximum cable length for non-twisted-pair cables?

Might want to create a thread on the forum to get some feedback. You might be able to get away with 1meter long but you’d be susceptible to interference.