Skip to main content
WARNING! From February 2022, these pages are no longer maintained.
Please see the current Duet3D documentation at https://docs.duet3d.com/
Accelerometers

This is a description of the experimental accelerometer support in RRF 3.3 and later

Author: David Crocker (and 4 other contributors)

RepRapFirmware 3.3 and later include support for connecting accelerometers. The primary purpose is to identify the ringing frequencies of the mechanics so that DAA and in future other forms of input shaping can be used to reducing ringing.

RRF 3.3 and 3.4beta1 support one type of accelerometer, the LIS3DH. We chose this chip because of its low cost and because it provides a mechanism to read all the data stored in its FIFO in a single block command.

RRF 3.4beta2 and later support the LIS3DH and the LIS3DSH (note the extra S). Connection via SPI and configuration are exactly the same as for the LIS3DH. Compared to the LIS3DH, the LIS3DSH has higher resolution, more convenient sampling rates, and produces a cleaner signal.

Breakout boards using the LIS3DH are readily available, for example SparkFun SEN-13963 and Adafruit 2809. UK resellers of these boards include The Pi Hut, HobbyTronics and Pimoroni. The Adafruit and SparkFun boards are also available from Digikey. There are two different versions of the Adafruit board; either can be used.

Accelerometer boards using the LIS3DSH are readily available via eBay, Amazon and other retailers.

Direct SPI connection to a Duet main board

Two further signals must be connected on the accelerometer breakout board: SPI CS, and INT1. The INT1 pin must be connected to a Duet pin with interrupt capability. The CS pin should be separated from other signal wires if possible because it is sensitive to interference, especially when using a Duet 3 Mini or Duet 3 MB6HC (see note below). 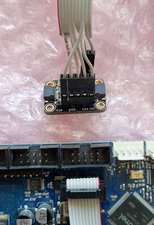 Both cables are wired as follows:

This is what we suggest:

Duet 3 MB6HC you can use either of the wiring schemes, ie connect all wires to the temperature daughterboard connector, or connect CS and INT1 to IO_n.out and IO_n.in.

Duet 2 Maestro use the same connections as for Duet 2 WiFi/Ethernet except that pins spi.cs4 and spi.cs3 on the daughter board connector are replaced by twd0 and twck0.

TO DO: Wire length/quality recommendations here. Some users on the forum have suggested using USB3 cable for longer runs.

Note: some users have found it difficult to get SPI-connected accelerometers to work with the Duet 3 Mini. We have found that one reason for this is that transitions on SDO are capacitively coupled into CS in the cable, especially if these signals use adjacent conductors. This causes a glitch on CS of a few nanoseconds, which is sufficient to cause the accelerometer to stop transmitting. This is why we recommend that you keep th CS signal away from other signal wires. Where this has not been done and the CS wire runs next to the SDO wire, a resistor with value between 100 ohms and 1K in series with SDO at the accelerometer end of the cable has solved the problem for some users.

Use command M955 to create an accelerometer; this will normally go in your config.g.

Duet 3 MB6HC: Depending on how you have wired it, use one of these commands to tell RRF about the accelerometer:

Duet 3 Mini 5+: Use this command to tell RRF about the accelerometer:

Duet 2 WiFi and Ethernet: Use this command to tell RRF about the accelerometer:

Duet 2 Maestro: Use this command to tell RRF about the accelerometer:

Duet 3 Toolboard 1LC v1.1: You do not need to tell RRF about the accelerometer with M955; it will use the default M955 settings. However, you can use M955 if necessary to set accelerometer orientation, sampling rate or resolution. The P parameter is the CAN address of the Toolboard and accelerometer device number, eg P121.0. For example:

Sammy-C21: You do not need to tell RRF about the accelerometer with M955; it will use the default M955 settings. However, you can use M955 if necessary to set accelerometer orientation, sampling rate or resolution. The P parameter is the CAN address of the Sammy-C21 and accelerometer device number, eg P124.0. For example:

You can add parameter I (uppercase 'i') to the M955 command if you need to change the default orientation.

Forum user Nuramori has produced a graphical guide to help illustrate the orientation options with a Duet 3 Tool Board 1LC rev 1.1 (with onboard accelerometer).

For most purposes the default sampling rate and resolution (10 bit resolution, 1344Hz sampling rate) should suffice. You can add R and S parameters to M955 if you want to change them. See M955 for details.

Prior to making measurements with the accelerometer, disable any input shaping (including DAA if you are using it), unless of course you are trying to establish the effect of using input shaping.

Use command M956 to collect accelerometer data. RRF 3.3 only supports capture mode A0 (immediate capture), but the A parameter must be present. Here is a typical command to capture data for a travel move in the X direction:

Acceleration measurements captured during movement typically show higher frequency components caused by the motors and belts. For this reason, you may get results that are easier to interpret if you collect data immediately after a sharp stop, using a command such as this:

RRF 3.4beta1 and later allow you to name the file that data is written to using an additional F parameter. The name should end in .csv so that the Accelerometer plugin for Duet Web Control recognises it.

A successful M956 command causes a new file to be created in /sys/accelerometers. The filename includes the CAN address of the board to which the accelerometer is connected, and the date and time that the data was captured. It is in comma-separated-variable format so it can be imported into a spreadsheet. When browsing these files in DWC you may need to click the Refresh button to make DWC aware of newly-created files.

The last line of the file will report the average data rate and the number of overflows recorded. If the number of overflows is nonzero then data samples have been lost and the file should be discarded. Overflows are rare when using CAN-connected sensors, but more common with direct-connect sensors because a single task is used both to collect the data and to write it to file. If you find that you get overflows every time you collect data, try the following:

Correction to this line. “Two further signals must be connected on the accelerometer breakout board: SPI CS, and INT1. "

Should be “Three further signals must be connected.. SPI, CS and INT. The total amount of connections is 7.

Is this data used to help with ringing or is only the collection of it currently supported?

Hi. How to use datas?

I am getting the error M956: Board address of driver must be 0. I am using a Duet 2 Wifi