WARNING! From February 2022, these pages are no longer maintained.
Please see the current Duet3D documentation at https://docs.duet3d.com/

Written By: Jason Znack (and 3 other contributors) 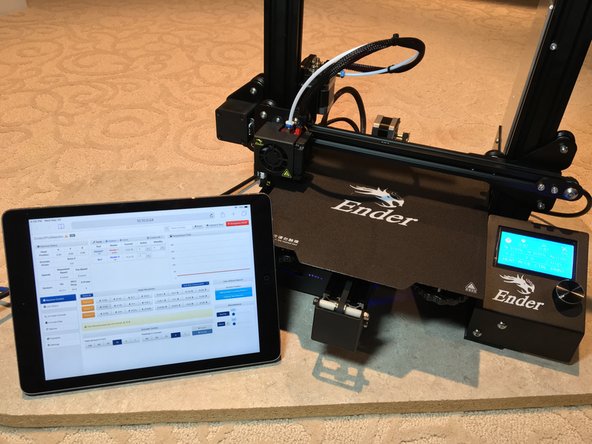 The Creality Ender 3 has become a very popular low cost printer option. It's not without its downsides, however. Loud motors, drivers, and fans can be maddening, and the lack of a dynamic web interface and network connection makes interacting with it more painful than it needs to be. This is not to mention the lack of thermal runaway protection in the Creality build of Marlin.

However, the small build volume, smaller motors, and single extruder design is a perfect fit for the recently released Duet Maestro electronics board, which brings the power and flexibility of RepRapFirmware into a smaller, lower cost package, while still maintaining powerful and quiet Trinamic drivers.

The combination of low cost but well built printer frame and suitable mechanics with the power and flexibility of the Duet Maestro and RepRapFirmware work together to create a very affordable and capable machine.

This series of guides will go through the process of upgrading a stock Ender 3 Pro with a Duet Maestro, from wiring, to firmware configuration, and basic tuning steps. Later guides will go into more advanced feature upgrades like installing alternate fans, LED lighting, and Z probes like the BLTouch.

Even though these guides will show an Ender 3, the procedures shown can be applied to other Cartesian printers.

Other guides in this series:

Steps found in this guide:

Cancel: I did not complete this guide.

15 other people completed this guide.

Can this tutorial be used for installing a Duet 2 wifi into the same ender 3 pro printer? Thankyou for the detailed documentation nonetheless!

Yes it can. There are obviously some differences with the Duet 2, but if you have the Duet2 documentation and wiring diagrams up as well you can get through it. If you have any other questions post on the forum.

Choose a size and copy the code below to embed this guide as a small widget on your site / forum.